Benedek shows interest in IT since the year of 6, when he joined an after-school computer class during the first year of elementary school. His interest got more serious (and then became a passion) during secondary school and he decided to join two paid courses related to web-development and programming.

After that he started studying Computer Science and met new friends, Zoltán among them. Forming a good team, they participated in several programming contests with success and later they founded the Orchard Hungary Community and started to work with Orchard and in its community.

Benedek considers the first Orchard conference (Orchard Harvest 2012 in Los Angeles) one of the great events of his life, where he got the chance to be one of the presenters (see the video). But most importantly, the founding of Lombiq is a big opportunity and motivation for him.

When not fiddling around with Orchard (for which he also is a core developer of), he likes to go cycling, reading fantasy books, watching movies and reading interesting articles about science and IT.

Along with working on daily management tasks, Benedek manages and takes part in the development of Orchard projects for our customers. 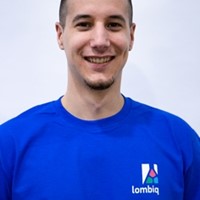