Gábor showed interest in IT since elementary school where he first met computers. He started to learn the Turbo Pascal language at the age of 12, when he decided to be a software engineer. He installed his first CMS-based website at the age of 15, which was an earlier Joomla version. In highschool he attended various IT courses and competitions, where he started to learn the Visual Basic programming language. Just for fun, he decided to make a Hungarian dub for the famous Doom 3 and Doom 3 Resurrection of Evil PC games.

In 2009, he became a Computer Science and Engineering student at Óbuda University in Budapest, where he learned about C#.

He met Orchard for the first time at an online course by György Balássy where he learned the basics of Webmatrix and Orchard.

He had a summer internship at Microsoft Magyarország Kft. in 2012, where he learned creating Windows 8 modern applications. He has references at Windows Store and also created Windows Phone 8 based applications as well.

He started to write his thesis in 2013, where he learned the basics of Microsoft Azure and multiplatform environment development.

In the beginning of 2014 he started to learn how to develop web applications using ASP.NET MVC and ASP.NET Web Forms technologies. He was also involved in a project where he had to write an application for LG Smart TV using some basic web technologies like JavaScript and JQuery.

In the summer of 2014 he got an e-mail from Zoltán about an opportunity in the recently founded Lombiq. He really liked the concept and accepted the opportunity to join the team.

Be sure to check his profile on LinkedIn and Facebook. 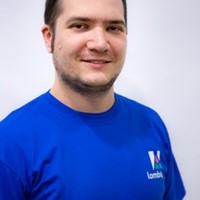