Owing more decades of experience in various fields and levels of economy István might serve Lombiq as a day-to-day contributor to solving tensions among people and generations. He had made it as a rule that in any of the industries the best results originate from permanently facing the facts, tasks and quick reactions to appearing failures. Critics are not enemies, and you are attacked much less times than you think.

He graduated as Master of Sciences in Civil Engineering at the Technical University and Engineer/Economist in Foreign Trade at the University of Economics in Budapest. He was later active as sales-engineer of Hungarian construction companies and representative of one of them in Germany. The nineties brought important changes also to Istvan’s carrier: he had become a banker in Austrian and German banks’ branches in Budapest, later managing director of Israeli real-estate development and a Russian-Hungarian trading companies.

All these responsibilities have added to his professional knowledge that is held at Lombiq’s disposal now.

Privately Istvan likes reading novels not only in Hungarian, but also in German and English, is interested in history and politics, likes swimming and skiing. 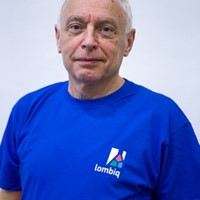