Programming – a mere idea at first, growing into a keen interest, quickly becoming a passion. A natural chain of events among software developers, and it was no different in Gábor's case either.

Computers have always been vital in Gábor's life. A zealous gamer since the age of 6, his continuous enthusiasm for video games evolved into regular participation in competitive gaming events.

Gaming remained Gábor's primary interest for the years to come as he was not fascinated by his formal education. Disinterested in his English Studies BSc, Gábor started considering other potential directions he could take. He drew inspiration from fellow Lombiq developer Márk and decided to try his hand at programming.

A love at first line, he first greeted the world in Python, taking the initial steps on a better path. This was also when he ended his brief professional gaming career, deciding to focus on advancing his software development knowledge.

After a few months of learning from online resources, Gábor started looking for junior software developer positions. This endeavor led him to Lombiq, where he was granted the chance to learn about Orchard and start gaining work experience.

In his free time, Gábor maintains his love of video games, enjoys listening to metal and synth music, and likes watching fantasy/sci-fi movies/shows. He is also an avid cyclist and gym-goer. 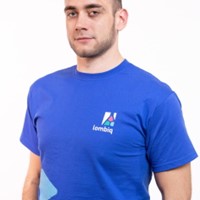